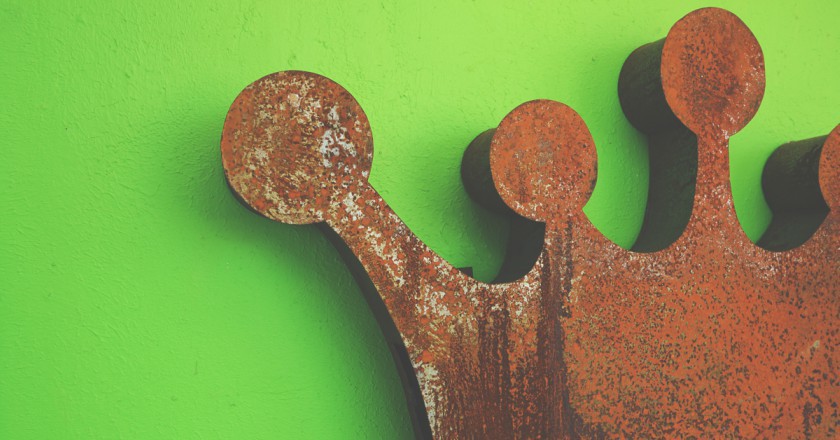 This is a true story.

In England we killed our king. Well, when I say that we did, what I mean is that Oliver Cromwell did. And, having chopped the monarch’s head off, and abolished the kingly office, Oliver clearly had no need of crowns, orbs, sceptres, and other princely decorations, which are necessary for conducting coronations. So, in our earthly wisdom, we removed the jewels from the decorations that we had, and melted the whole lot down for scrap. It was extremely valuable scrap, mind you. But, that was all it was.

Then an awful thing happened. We needed another king! Kings can find themselves in short supply, at various times in history. And, we, the English, needed to provide ourselves with one in something of a hurry. But, as luck would have it, our headless one had produced an heir before his rendezvous with Whitehall’s executioner. We asked the young successor if he wanted his dad’s old job. And, luckily for us, he said yes. The displaced, young king’s forgiveness was a mighty boon for the English, because, as a republic, the entire country had gone to rack and ruin. Anarchy was everywhere. And, we’d come to the conclusion that, maybe, the trick of cutting kings’ heads off wasn’t that clever after all. Cromwell even ordered one such severed body-part stitched back with needle and thread. But it didn’t do much good.

As you’ll be aware, when inviting an exiled king from his French, and Dutch, hiding places to the English throne, delicacy needs to be born in mind. One can’t simply say, “right, there you are. You’re king!”

Extraordinarily valuable trinkets are required to legitimise the process. The only problem was, in England, we’d thrown all of our coronation jewellery into cauldrons years earlier. And now, all we had left was a handful of ceremonial swords and a spoon. Hardly the things you need when meeting a homecoming king at Dover.

Luckily, one of our patron saints, called Edward, didn’t need his crown any more, because he’d already died six hundred years earlier. So, we decided that the new king could have the use of it. But, since the priceless object had been neglected for half of a millennium, it needed a wee bit of a polish before it was respectable enough to put on a king’s head in public.

Now, that was all fine and good. And, in fact our new king was so delighted with the trinkets that we’d rustled up for him that he accepted all of them and locked them away in the Tower of London for safekeeping.

And that, had it not been for the most audacious thief in British history, is how things would have remained. But, Colonel Blood, as he liked to call himself, decided that the king didn’t really need the new jewels. And, according to the colonel, things would be fairer if he relieved both the monarch, and the nation of them.

And so, the colonel, who was a dab hand with sword and pistol, struck up a relationship with the keeper of the jewels. The two men became friends, and the colonel, complete with his family, paid numerous visits to London’s tower. The jewel-keeper obviously thought that the colonel was being sociable. He wasn’t aware that his new found friend was actually casing-the-joint. But, on the 9th May 1671, reality caught up with him, when the colonel, now, cunningly disguised as a priest, bashed him over the head with a mallet, and also stabbed him with a dagger.

Now, you’ll doubtless be aware of the fact that such attacks aren’t the friendliest of actions. The keeper of the Crown Jewels was mightily upset on account of how he’d been assaulted by the colonel. And he took to shouting “Murder, Treason!” at the top of his voice.

Unfortunately for the colonel, he had brought with him no plan of how he was actually going to remove the jewels from the tower. And, now that he had them in his possession, he was completely at a loss as to what to do next.

He decided to take the orb, a priceless, gem encrusted ball, and stuff it down his trousers. The sceptre was too long to fit into the colonel’s swag bag. So he decided to saw it in half. An awful hullabaloo ensued. The jewel-keeper’s children appeared to resent both the dastardly assault on their father, and the fact that the king’s possessions were being stolen. The colonel and his accomplices didn’t manage to get the sceptre sawn in half. And, in their unseemly haste, they dropped it by mistake.

The crown, however, the robbers did get. The colonel, in his infinite wisdom, decided that the best way of removing that item was first to bash it flat with the mallet that he’d assaulted the tower’s keeper with. This he did. Then he shoved its remains into his coat pocket. Meanwhile, by this time, Colonel Blood had decided that the Tower of London was no longer the most suitable location for him. And he decided to make off.

After several exchanges of flint-lock-pistol-fire, which luckily hurt no-one, the colonel and one of his accomplices were apprehended before they could reach St Katherine’s Gate, where their get-away-horses were tied and waiting.

Now, the colonel petitioned the king for a pardon, which he was granted. In fact the king made him a wealthy man. But, that’s another story. Suffice it to say that in 1671, Thomas Blood, a rogue, reprobate and scoundrel of the highest order, stole the Crown Jewels from the Tower of London, and very nearly got away with it.