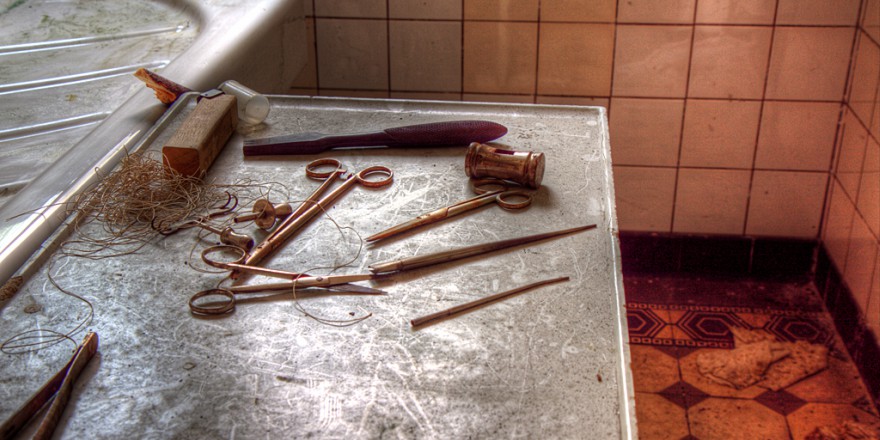 Readers Warning! This is a shocking medical story, perhaps slightly too cruel to relate. It was told to me by a former medical student. It’s about some of the things that they get up to in their college’s experimental laboratories, when the professors are not there! (Names have been changed to protect the guilty.)

The Jubilee Tower is more than a hundred and fifty feet high. It’s the perfect place to watch girls passing below. On the prettiest ones we might drop something. Or we might simply make some kind of comment. Such behaviour is both idle and immature, I know, but nevertheless we can’t resist it.

Daniel, the cleverest student among us, took his medical degree finals almost a year early. And then, since he no longer had any work to do, he tended to sit in study classes throwing balls of paper at those of us blunderheads who still had to do our revision. Daniel’s results had still not yet been published, so he couldn’t accept a tutelage post at Queens Memorial Hospital, yet. We all expected him to score the best grades that anyone from this faculty had ever managed to get. So none of us was greatly troubled on that account.

On this particular day I had to complete a dissection. For those of you who have never attended classes in a medical institution, let me explain that there are generous people, who for some unknown reason, bequeath their corpses to university departments, for the purposes of research.

And one such bountiful sponsor was lying immediately before me, on a stainless-steel dissection bench at this time.

Now, within our laboratory we have no air conditioning. It was a hot September day. And within the room the temperature must have reached at least twenty-five degrees.

“No thanks,” I replied. “I don’t want to attract any flies. Look, I don’t really need you here. Why don’t you go for a swim?”

“Oh, I’m alright!” my friend then said, picking up an evil-looking bone-saw. “Do you want me to do the xiphoid process of the sternum?”

The xiphoid process is a standard post mortem incision, where the examiner takes a large scalpel and makes a division in the trunk. This is a Y-shaped cleft. The arms of the Y extend from the front of each shoulder to the bottom end of the breast bone. At this point the rib-cage may be sliced through, using a circular saw. If you’re not careful it can make quite a mess. And you might wish to wear a plastic, disposable apron the first time you perform this operation.

Now, I actually don’t enjoy making that cut. And, since Daniel seemed eager to do it for me, I couldn’t see any harm in letting him carry on. Accordingly, I took a precautionary step backwards, and waived him closer to the table.

If you’ve never seen a circular saw cutting through a body, let’s just say that it’s not a sight for the faint hearted. And I’d advise you not to stand too close to the corpse’s head. As loose brain matter is very light, and tends to fly off in many directions.

So, now that you’re with me, in your disposable apron, and standing a suitable distance from both Daniel and his electric saw, let me tell you what happened next.

“What does Professor Jacobs want you to focus on?” Daniel asked me. He was facing me, rather than looking at what he was doing, and his saw was moving rapidly across my cadaver’s mid-section.

“Daniel, look Daniel, you’re making a mess!” I cried. “Here, look, give me the saw. Why don’t you freshen-up, and meet me in the gym, at six o’clock?”

Daniel had made a deep incision into my specimen’s right wrist.

“I suppose you’d better had,” I agreed.

I wasn’t greatly pleased by this point. And I think that my displeasure must have been apparent.

“Oh cheer up!” my friend advised.

And then he pointed through our window. “Look, Rebecca’s coming. And we all know how much you admire her, don’t we?”

“Look, Daniel, please!” I begged. “Can you let me do the cuts? You’re weaving all over the place. I can’t work like that!”

“I’ll be done in a minute,” Daniel replied, wiping splatterings of various kinds from his face with the back of his left hand.

I was pleased when I saw Daniel moving away from the dissecting bench. He was going around it, away from our main sink, which I found odd. I quickly stepped over to where he had been standing, and set to tidying up the implements which he had carelessly scattered around. I had a cloth and some sponges, and I was wiping several surfaces, when I saw Daniel picking up a severed piece of my body.

But, Daniel didn’t put it back. In fact, he ignored me completely. He crossed the room, in a few great strides, and threw open the window.

The girl on the grass below looked upwards and shielded her eyes from the sun. “Oh, hi, Danny,” she called. “What is it? What’s the matter?”

There were two girls directly under our window. Rebecca’s best friend, Ruth, had put her books down a little way off, and was kneeling down. Two other students had crossed over from the refectory and were moving across the lawn to where the girls were.

“Daniel!” I said. “Daniel! Close that window and come back here!”

“It’s alright, Joe,” my friend insisted. “You carry on with what you’re doing, and leave me be!”

Now, at that point I should have done something. My career, and his, would both have been so much different if I had. But, alas, I didn’t. I left Daniel to his own devices, as I had always done. And I carried on cleaning down my bench. And, because what I’d allowed him to go on to do earned both of us expulsions from the university, neither of us ever qualified with our medical degrees.

If only I’d done something! That thought haunts me nearly every day of my life.

“Rebecca, I’ve got something for you!” Daniel shouted. “Come closer. That’s it. Just stay there.”

“I know you can’t see!” Daniel shouted, lifting my corpse’s severed wrist up to the height of the window-ledge. “That’s why I’ve brought you a hand!”

And with that cry he launched the severed specimen out onto the lawn below. The girls screamed and ran about in all directions. And it wasn’t long before the dean of the medical school summoned both of us to his study.

“I’m sorry to have to inform you gentlemen of this,” the dean said. “But, behaviour of that kind simply won’t be tolerated. I’m going to have to ask you both to pack your things, and leave.”

And that, with the addition of few bureaucratic details, which I’ve omitted, for the sake of brevity, is the story of how I came to leave my university without completing my degree.

The Art of Human Sacrifice