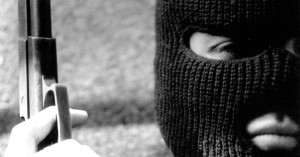 Before you read this story (it’s almost a true tale) you ought to know that some bright spark, in the current British Police Service, has predicted that the only time you’ll see a serving police officer, is when…

(Well, perhaps you should read the story, to find out.)

“Who can fight crime?” asked the leader of our local council’s focus group.
Theoretically, lots of people can. So, I raised my hand.
“Oh, good,” he said. “Step forward.”
I remained seated.
“The Police?” I suggested.
All of us looked out of the window.
“Do you see any?” he said.
Jennifer was arranging flowers and glanced at her watch.
“I think you have to leave it a bit longer,” she said.
Below, a man, in black, climbed out of a ground floor window. He stared at us and then refitted a dark balaclava, before dashing into the distance.
“Wait, for how much longer?” I said.
I could wait no more.
“I’m going to find a police station,” I announced.
Jennifer looked uncomfortable.
“We don’t really do police stations, any more,” she said.
After a considerable period of searching, we managed to locate one police reception building.
“What seems to be the problem?” a woman said, from behind an enormous sheet of glass.
“Burglary!” I explained.
“Aha,” she said. “What did he look like?”
“Hard to tell,” I replied. “He had a mask on his face.”
The woman sucked her teeth.
“If you want my advice,” she said. “Next time call the Police.”
We looked at each other.
“You are the Police,” I said.
She pointed at a locked, blue door in the corner of her cubicle.
“They are the Police; I’ve already been retired for ten years. Nowadays, all I do is look after this window.”
I was getting cross.
“No offence to you,” I said. “I’m sure you’re a very nice lady. But, we didn’t come
here to see a window. We came to see a police officer.”
“Ah,” she said. “A police officer.”
I could feel my bones cracking. I lowered my voice.
“A police officer,” I said. “Do you have any?”
“Have you dialled 999?”
“Of course we have,” I screamed. “No one came. That’s why we’re here!”
The woman frowned.
“There’s no need to be abusive,” she said. “You could be arrested for doing that.”
My friends were holding me down.
“How?” I screamed. “How? How could I be arrested?”
“Well,” she said. “I’d call the Police.”
“You’d do what?” I said. “You’d call who? There are no Police.”
“I’d be careful, sir, if I were you,” she said. “We take that kind of behaviour very seriously.”
“What behaviour?” I screamed. “Asking for a policeman to attend to a burglary, kind of behaviour?”
“Sir,” she said. “Sir. I’m asking you nicely.”
“Asking me what?” I yelled.
I wiped spittle from my mouth.
“Asking me what?”
“Sir,” she said.
“What?” I said, and sat on the floor, sobbing.
When I opened my eyes a tall man in a dark blue uniform was standing beside me.
“Good afternoon, sir,” he said. “You’re under arrest for abusing the Desk Officer.”
I wiped my face.
“Oh, jolly good,” I said. “And, the burglary?”
He smiled.
“Don’t worry,” he said. “Abusing the Desk Officer is nothing like a burglary. It’s a civil offence.”
“Did she tell you about the burglary?” I said. “Did she tell you why we’re here?”
The policeman scratched his head.
“Come to think of it, no,” he said. “Why are you here?”
“To report a burglary.”
“No problem,” he said.
He rang a bell.
“You’ll need to speak to the lady who looks after this window.”