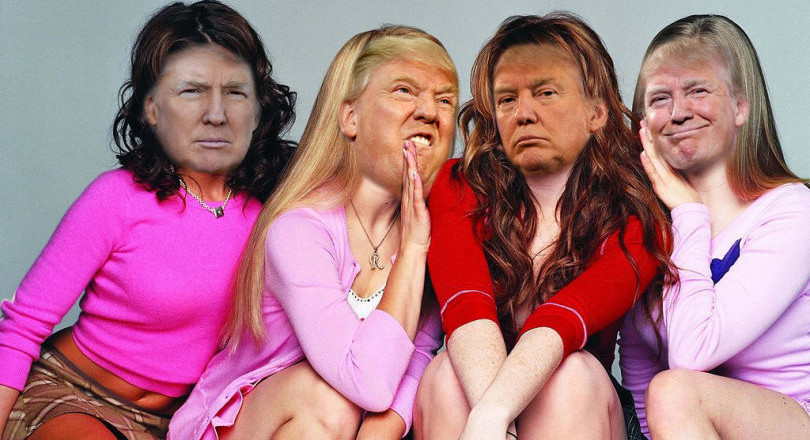 This is how Donald Trump might come across to English people, especially if one of them is a female reporter. This Donald Trump funny satire about his attitude to women is of course all made up, or is it?

Mr Trump, 67, today announced his engagement to Dilma Rousseff, the President of Brazil, in the society pages of both the New York Times and the Times of London.

“Of course, she can’t visit the United States,” he said. “I’ve built a fence to keep her out.”

“We thought that you didn’t like women. So, what’s brought you two together?” asked a single, male correspondent from London.

“Some of my best friends are women,” rejoined Trump.

“Do you think that a woman could run the United States?”

Trump looked like a man in receipt of a nest of rotten eggs. “Look, Buddy,” he said. “Women are good at making the whole place look nice. But, if you want the Islamic State bombed, real good, then you need a guy.”

“But, women can also telephone the military; Margaret Thatcher did.”

Trump nodded. “Right, Buddy,” he said. “I met her once. But, she was more like a guy in a dress than a woman.”

My companion reporter looked a little surprised. “A transvestite?” he said.

Donald put on his busy look. “Come with me, Buddy,” he said. “I want to show you something.”

He took us to an old Chevrolet, which looked incredibly battered, considering that its owner was a billionaire. We tugged the handle of my door, which didn’t open. “Best climb through my side,” Trump advised.

We rattled several dusty miles along Highway 1181, turning into Trump Aviation School, where Donald aimed the vehicle straight at his creditors screaming “Get the hell out of my way!”

“Goodness gracious,” I said, as the assembly rolled in the dust.

“They’re OK,” said Donald, adjusting the peak of his cap. “Those are the ones I like.”

The Trump Aviation School had one aeroplane, an aging twin-engined Dakota.

“Think of it as America,” Trump advised, patting the cockpit canopy.

My reporter tapped my arm. “I think he means that it’s iconic.”

As the engines thundered into life, Donald patted the throttle quadrant. “Why d’ya think women didn’t fly bombers?” he said.

“Is this a bomber?” I asked. “I would have expected the Memphis Belle.” I knew there must be a perfect reason why women hadn’t flown bombers. So, I decided to wait for it. For quite
some time, nothing happened. “I was wondering why women didn’t fly bombers,” I said.

Trump took his hand off the rudder levers and cupped them around his ear. “I can’t hear you,” he said.

Trump gave me his best Trump shrug. “I dunno,” he said. “I guess, there weren’t any women pilots.”

Donald took us in to land.

“So, Mr Trump,” my reporter said. “What would you like us to tell Britain about the kind of All American male that you represent?”

Donald looked sad. “Back in the day,” he said. “You did have men like me, standing in the rain, digging trenches and eating corned beef. But, now, you’ve joined Europe, started drinking red wine, eating cheese and acting like pansies. Maybe, it’s too late for you guys, even if you leave the EU. See, in the US, we’re still the same old hunting, fishing pilgrims who came
over on the Mayflower. That’s why folks vote for me. Because, they don’t want America to turn out like you.”

I had Camembert in a sandwich. When Donald looked my way, I hid it underneath my seat.

“Looks like Heaven, don’t it?” he said. Donald offered me a half-charred steak, about the size of my head, with blood dripping from it. I took some lettuce.

“Here’s the reason,” Donald said, waiving both hands, in wonder, at his living model of Americana. “If my border guards were going to open the fence long enough to let Dilma through it, she, at least, would eat the meat.”

The Confessions Of A Republican Campaign Manager

If you have any other Donald Trump funny material worthy to be baked into a satire, I want to hear from you!