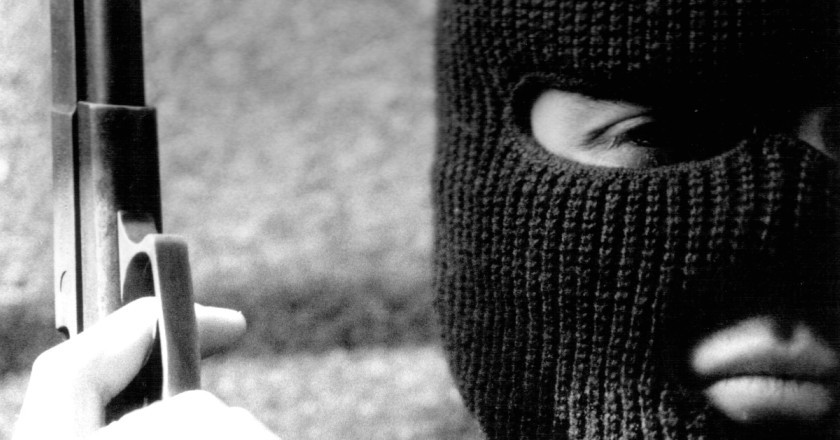 This short crime story is about the ambush of a Securicor van. A robbery with guns, balaclavas, get-away vehicles and all the trimmings. Enjoy!

A strange light appeared over the white cliffs of Dover. Pat screamed, “as long as you don’t drop the sodding thing in the shop, you’ll be alright, now get in the van!”

He wasn’t joking. The veins in his neck were sticking out the way they always do when he gets upset. I took the sawn-off shotgun, but I didn’t get into the van. Pat had the driver’s door closed, so he couldn’t see I was dawdling. Then, he just pulled out. He slammed the breaks on. I must have been standing in the driveway with the gun in plain view. The van shot backwards so fast I had to jump aside. His fist landed squarely on my jaw. This time, I got in.

It was the first time I’d ever passed the Kentucky Fried Chicken at the end of Maynard Road without feeling hungry. I couldn’t feel anything. I watched a solitary raindrop trickle down the passenger’s window pane. I remember thinking, ‘its outside and I’m in here.’ It didn’t mean much to me then, it was only a drop of rain. Stumpy, with the same inane grin on his face that he always wears, offered me a half eaten Mars bar.

“Cheer up,” he advised, guffawing and chewing simultaneously, “it might never ‘appen.”

I ignored him and pulled my balaclava on. I had to rest every few seconds. My heart was beating so fast I couldn’t concentrate. And I didn’t want the gun, which was between my knees, on the floor, to go off in my face.

In the damp supermarket car park, there was white Ford Sierra, which looked as though it had seen better days and a Securicor van, with its engine running. The stationary Sierra flashed past the driver’s window. A second later we crunched into our target. At the same time, my head hit the panel behind the seat. I heard, “out, you tossers!” The van was empty. Stumpy crouching like a knife fighter, with the gun in his left hand, steered the helmeted guard towards the rear of his van.

Even from where I was, I could see spittle flying from his mouth as he screamed, “get the cash box now, you sod! Get the sodding cash box!” and waved the gun a millimetre from the trembling man’s face. The guard probably only meant to steady himself, but his pause, behind the armoured vehicle was too long.

Stumpy hit him in the back of his right knee. As he fell, Pat’s kick yanked back his head. Only half standing, he managed somehow to open the reinforced steel door. Felled by more blows from both men, he went to the ground and stayed there.

Pat threw the empty cash box out of the Sierra’s window while Stumpy lurched into Maynard Road. I don’t know if he knew the road behind the hedge was empty. Instead of taking the roundabout beyond, he flew down the remaining two hundred yards to the foot of Station Road on the right hand side. Our boilersuits, which by that stage were only half off, now went into Pat’s bag, joining the discarded facemasks. In a hollow beneath the railway bridge, we switched cars for the final time.

Pat drowned out the sound of sirens below us by whooping and shouting, “those morons will spend ages searching down there for our kit and we’ve still got it!”

He dropped us and the holdall containing our spoils a few feet from our house. With his hand on my shoulder, Stumpy steered me into the hall. He pulled his left hand across his mouth as mum came out to meet us.

“There you are,” she said, without a smile. “I’ve been trying to call you. I’m late.” The last thing she said to me was: “you can’t go to school looking like that. I’ve left your skirt on the ironing board.”

The windows in this place are too high up to see the rain. Of course you can still hear it. A prisoner showed me yesterday how to jam my bedding into the corner of the wicket in my cell door. I know they’re coming round to check on me in twenty minutes. After that, they won’t come again till tomorrow morning. I’ll be dead by then. I know when I hang myself, my feet will still be on the floor, but I’ve got the strength to see it through. When you find this note, please can you tell mum, I’m sorry?

Did you like this short crime story? Why don’t you read my thriller, The Expendability Doctrine:

Another short crime story is the beginning of a story set in Haiti: